An experimental archeology video will guide visitors through the history of the Colosseum. From daily life inside the Flavian amphitheater to the many transformations over twenty centuries. 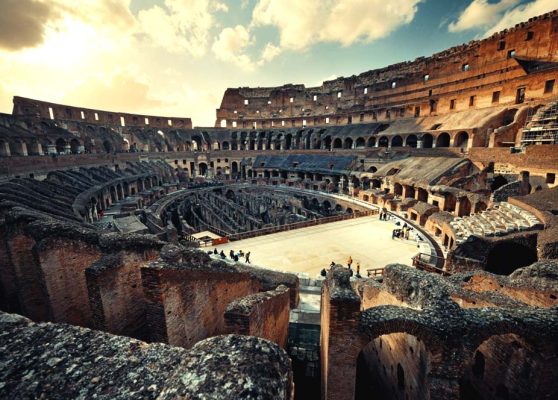 The Colosseum is by far the largest amphitheater ever built during the Roman Empire. This memorable work became a landmark for generations of students of architecture and then, with its state of semi-abandonment over the centuries, inspired painters, poets and artists of the Renaissance and European aristocrats and intellectuals ( Grand Tour) attracted by the charm of its monuments from the 18th century to romanticism.

The Colosseum tells its story

The exhibition of the most famous monument in the world develops along the 12 arches of the second level with more than 400 works, archaeological pieces, models, photographs and video contributions.

The unknown life of the Colosseum will be a surprise for the visitor, who will be able to retrace the whole history of the Flavian amphitheater of the emperors: from its construction, place of bloody battles, at the beginning of the 20th century, to end with a series of images of the Colosseum, which has become a mythical monument.

The restructured museum space modulates the history of the monument in seven sections and is distinguished by the presentation of decorative marble elements from the imperial and medieval period; this last period, in which the Colosseum, having lost its original function, was used as a space for commercial, residential and religious activities, which transformed its functions and architectural structures.

Completed in 80 AD, during the reign of Titus, the Colosseum could accommodate up to 80,000 spectators, excited by the often cruel representations of the famous gladiator fights, but also of those more pompous such as the Naumachie (battles naval).

With its two thousand years of history, the Colosseum proves that the life of this monument-symbol of Rome did not end with the fall of the Roman Empire, but on the contrary, it proves its astonishing ability to transformed into different identities over two millennia, an extraordinary living complex in perpetual change.

Archaeological excavations, studies and research in recent years have increased and described in detail the information about the amphitheater in its millennial life, in its multiple uses, so that it can finally be known, thanks to this exhibition, with more rigour.

From Romanticism to Pop Art, with the complicity of a large number of artists, the history of the amphitheater, from the 20th century, generated a “parallel” life, transforming its face into a timeless symbol. Not only have great artists been inspired by this imposing site in their paintings, temperas and drawings, but the Colosseum has also inspired cinema and music.

The exhibition also retraces this “parallel” life made up of images, sounds and words, presenting photographic and video contributions, including neorealist films by great Italian directors and Hollywood films, which have made the Colosseum a place symbolic of our country.

The exhibition presents for the first time a communicative layout, not only in English, but also in Chinese ideograms, confirming the intuition of the increase in tourist movements from the Far East.

Share your personal experience with the ArcheoRoma community, indicating on a 1 to 5 star rating, how much you recommend "The Colosseum tells its story (Il Colosseo racconta la sua storia)"