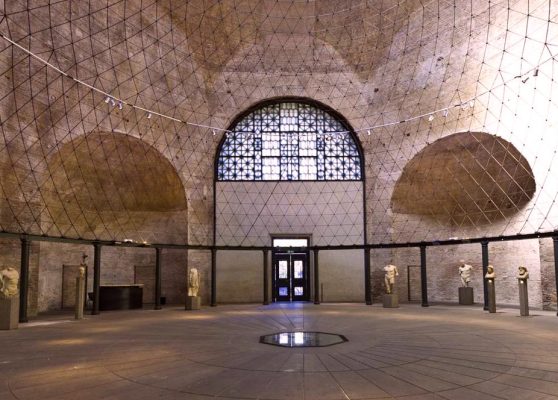 On June 15, 2022 in the Octagonal Hall (called Planetarium) of the Baths of Diocletian inside the National Roman Museum (“Museo Nazionale Romano”), the Museum for Rescued Art (in Italian “Museo dell’Arte Salvata”) was inaugurated.

The definition “Rescued Art” contains within it all the works and artifacts that in recent years have been rescued from illicit trafficking, natural disasters and theft. The purpose of the museum is to present these works to the public before they return to their places of origin.

It is a dynamic museum, made up of display cases and modular panels, in order to allow a different exhibition and arrangement from time to time. At the basis of this type of presentation is the idea that the museum is always ready to welcome new exhibits to replace those already on display, which will receive adequate accommodation in museums throughout Italy. Accompanying the rescued works and artifacts are the stories of the works and their recovery by the Carabinieri Unit for the Protection of Cultural Heritage, the Blue Helmets of culture or the Central Institute for Restoration (ICR).

On the occasion of the inauguration, archaeological finds from Etruria and Lazio dating back to the seventh century BC were chosen and recently returned from the United States (late 2021 – mid 2022).

The location: the octagonal hall of the Baths of Diocletian

The Octagonal Hall is part of the central complex of the Baths of Diocletian and is the last of the four rooms that stood next to the caldarium. It was probably used as a secondary frigidarium, as suggested by the hexagonal basin that was placed there until the sixteenth century. The hall, square on the outside and octagonal on the inside, is covered by an “umbrella” dome, with ribs originally decorated with stucco.

The stucco decoration of the ceiling and the marble decoration of the walls have unfortunately been lost. In 1928 the Hall was transformed into a Planetarium through the use of a projector that reproduced the celestial vault on the dome. In 1987 the Planetarium was removed and only the geometric lattice framework on metal columns and cast iron capitals remains.

Tickets are no longer available.

Share your personal experience with the ArcheoRoma community, indicating on a 1 to 5 star rating, how much you recommend "Museum for Rescued Art"